As you know I enjoy writing about my projects and things I work on in the hopes this will help someone else in the world. Recently I purchased a 1985 Chevrolet Monte Carlo SS and though its in great condition as with any 35 year old automobile there are lots of maintenance items that need looking after. While out for a cruise I noticed some issues with blower motor speed control and decided to give a go at repairing it.

Blower Motor Works, but only on high!

The blower motor works well, however it only runs on the highest setting. Any other speed other than high will cause the motor to shutoff.  I had this same issue on a 1999 Pontiac Grand Prix GT and had determined the blower motor resistor to be the issue, so I figured I would replace the same in my 85 SS

The blower motor resistor is a $12 part that can be ordered on Amazon (CLICK HERE) and can be installed in about 15 minutes in any GM G-Body car from 82-87. This would include your Chevrolet Monte Carlo, Pontiac Grand Prix, Brick Regal and Oldsmobile Cutlass Supreme. The example above even includes the wiring harness if yours is damaged.

Facing the car from the front the blower motor housing is on the passenger side next to the firewall.

Just to the right is a wiring harness that connects to the blower motor resistor.

To remove the resistor first remove the wiring harness (which just pulls off) then simply remove the two hex screws that are holding it in.

As you can see from the above photo I had previously removed one of the screws.

Is the resistor really bad?

I probably should have tested the resistor with a continuity tester before I went out and ordered a new one, however I was lazy and since the part was $12 I figured I would risk it. 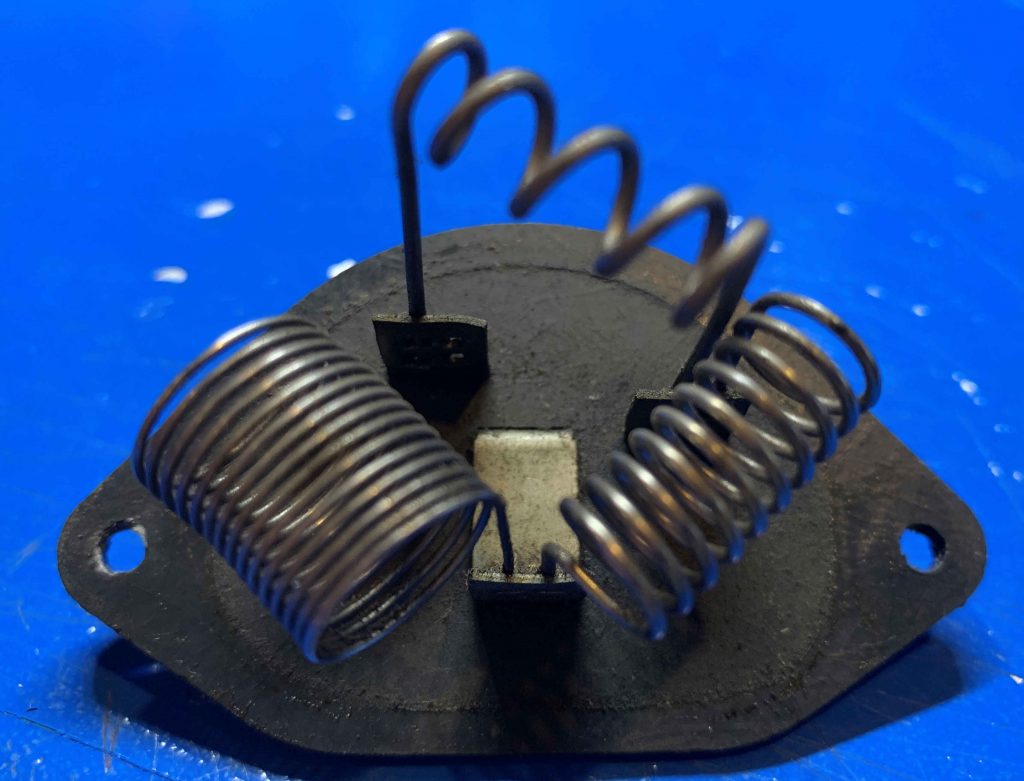 As luck would have it, the 35 year old blower motor resistor that came off the car was good. After the swap the blower motor still only works on HI speed.

Next step – testing the actual switch in the climate control

The climate control has 4 positions, lets call them LO, MED1, MED2, HI. In the HI position the blower motor gets power directly from the cars electrical system, bypassing the resistor. (Which works fine in my car) However in the other positions voltage is sent to various wires connected to the blower resistor.

I wanted to test the switch and see if changing its position actually made a difference where the voltage was applied. I labeled the wires in my car as follows (See image above).Then I used my multi-meter to test for voltage on each pin while moving the switch from one position to the next. 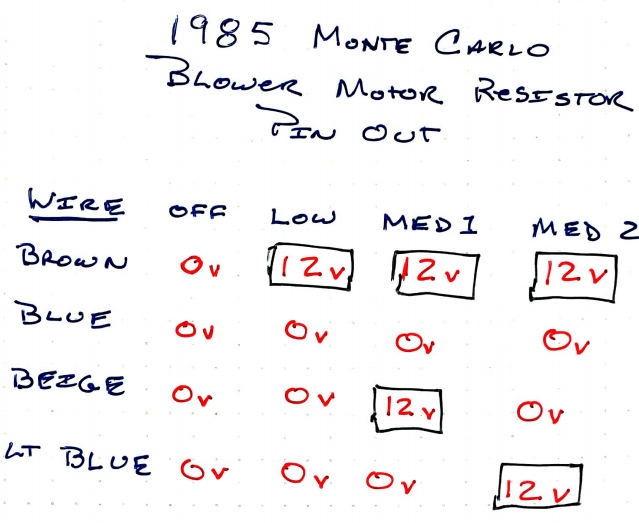 As you can see 12V is seen across various wires in each position, this leads me to believe the dash switch is also working as it should.

In part 2 of this article we will focus our attention on the blower motor speed control relay. I am just waiting on the part to arrive.

As soon as the part arrives I will update this article