Recently I won a lot of handheld games from the 80’s at a local auction. Some of the games were in rough shape while others were in fair to good condition. This game Chase-N-Counter was in good shape with minimal wear and after installing a new LR44 battery I fired it up to see if it worked.

To my surprise Chase-N-Counter  was like taking a trip in a time machine. I was 9 years old in 1982 and I remember being jealous of the kids at school that had calculators, but especially jealous of the ones that had handheld games like this.

I started my quest to try and figure out what if anything Chase-N-Counter is worth. Searching the internet revealed very little about the game, and searching eBay was even less fruitful.

I was able to determine it was manufactured in 1982 by the General Consumer Electronics Corp.  In addition to a standard calculator the unit also featured 3 games. Details about each game below.

I’m not sure what game inspired Treasure Trek — possibly not an arcade game though.

Treasure Trek has eight rooms you can enter (the picture at left) where you have to claim the treasure then leave. Sounds easy enough, except you have to remember the position you were at when you entered the room so you can exit the same way and that you’ll have to avoid falling boulders, firing arrows and slithery snakes.

Chomp ‘n Chase was obviously ‘inspired’ by Pacman but the maze is spread out over six screens.

You don’t’ have to eat dots, but do need to get the four power pills which, like the arcade game, give you a short burst of invulnerability to catch the pursuing ghosts.

This game took its inspiration from Frogger and works reasonably well 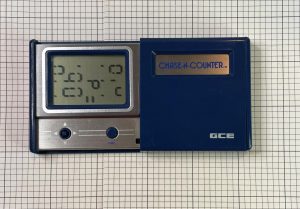 considering the small screen it has to work with.

Only the road part of the game is used (no room for the river, )There was only 4k or 5k of RAM available for the entire unit (calculator included) so to have the variety and play-ability of the games that are available was pretty amazing.

What did it sell for? 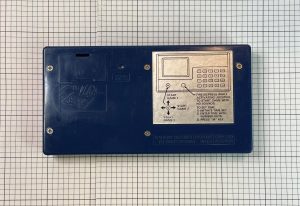 on the Internet I had to take a guess as to what it would be worth.  I put the game up on eBay for $50 and then made the mistake of adding a buy it now for $100. The game was sold in a matter of hours, which leads me to believe it was worth considerably more. Hopefully someone purchased it for their private collection and not to make a buck due to my lack of knowledge. Thinking about it, that’s exactly what I did considering I only paid $15 for the game myself.

Thanks again for reading my blog.
-Joe