A blog I enjoy reading daily – Consumerist – had a post regarding items that were being auctioned off at Radio Shack head quarters. I’m not going to re-post everything, but just a few items I actually got to use and sell. 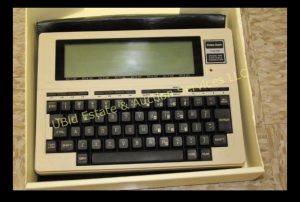 I didn’t start working for Tandy until about 1990, so these things were already about 7 years old. We still had a few hanging around the store so they were a fun toy to play with. Write a few lines of BASIC code and off you go. I even remember they had a built in word processor

application and a small printer you could connect to. I went on to buy a pocket PC-6 and used it in high school and college! 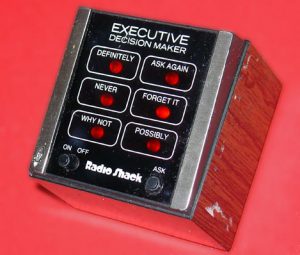 When the magic 8 ball is too mystical for your corporate life style the executive decision maker is there to help you out. Maybe RS should have taken some of its own advice over the years and used this little box of wisdom. 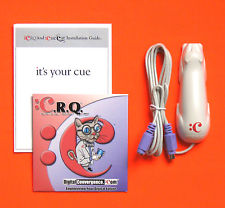 What a total waste of time this was! The Cue Cat arrived after I left Radio Shack and was supposed to be a marketing gimmick. Plug the cat into your PS/2 port (LOL no USB yet) and then scan bar codes in their catalog and sales circulars to load web pages featuring the product you scanned. The cats didn’t work well and the internet community immediately found ways to hack them  for other use. I modified mine to scan bar code labels on backup tapes that were being sent off site.

I remember as a kid and also while working at RS waiting with anticipation for the new catalog to come out. Thumbing through all the pages to see the next best thing in consumer electronics. Sometimes I miss those days. I worked for Tandy just over 6 years and these are the covers of my favorite catalogs. 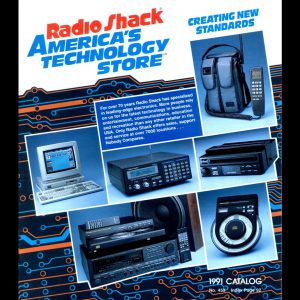 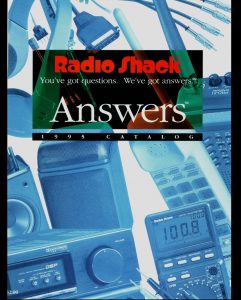 Back in the 90’s Radio Shack was great place for a college student like myself to work. I had the ability to write my own paycheck depending on how much effort I wanted to put in. Corporate was helpful and provided training classes so we could learn about all the features, and we were able to try everything out in the store too. Radio Shack is on of the reasons I am an Amateur radio operator today, and solidified my love of electronics and computers. Sure there are lots of other electronic stores out there, but I bet none are giving you a free battery once a month.

The Shack – you will be missed!